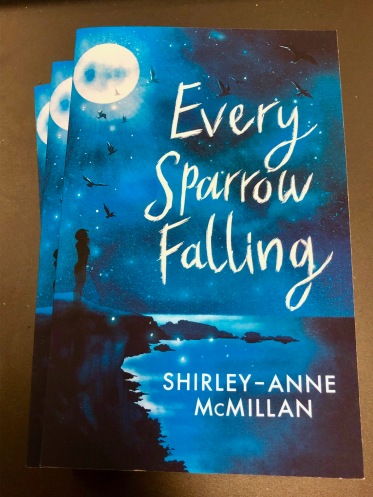 ‘Be nice to the majority of people and they won’t bother you much. Don’t get too involved. Have a laugh but keep your distance.’

These are the words 16-year-old Cariad lives by. She’s just been placed in yet another foster home, this time with an elderly Christian couple in a small town off the coast of Northern Ireland.

Cariad knows how to play this game. She’ll toe the line just enough that her new foster parents don’t ask what she gets up to when the sun goes down, just enough that they leave her alone. It’s easier that way.

But when a boy at school disappears – presumed dead – and no one seems to care, it really bothers her. Then one night out walking on the clifftops, she sees him and he asks her to keep his secret.

Don’t get too involved. Have a laugh but keep your distance. These are the words Cariad has lived by . . . until now.

Every Sparrow Falling is the third YA novel by Shirley-Anne McMillan published by Atom. It is released on 12th September 2019.