I have just watched the documentary film ‘This Is What Love In Action Looks Like’, due for general release in the UK in May 2012 [Edit- you can now buy this movie from Amazon]. Directed by Morgan Jon Fox and distributed by TLA Releasing, the documentary tells the story of what happened when a young man named Zach Stark came out to his parents who subsequently decided to send him to a residential program called ‘Love In Action’ to cure him of his homosexuality. Anxious about their plans, Zach blogged about it on the internet and what happened next caused a national media debate about ‘ex-gay’ programs and their involvement with minors.

Zach’s friends forwarded his blog to other people and what began as a few outraged teenagers passing around some information ended up being an eight week protest outside Love In Action in Memphis, where Zach’s friends, their friends, their friends’ parents and psychology professionals to name but a few gathered in support of the young people who had been sent to Love In Action in the hope that they might graduate the program as people who had left behind ‘the gay lifestyle‘.

I find it very hard to write about this kind of thing. I have sat in meetings alongside proponents of ‘ex-gay’ therapy and I always find it difficult to speak. It’s not that I’m afraid to speak (I mostly find that I have trouble shutting myself up when faced with an opposing view, as many people will testify…), I think it is more of an emotional reaction; there is an anger and deep sadness about the world that I find very hard to express when I think about the wonderful LGBT teenagers that I know, and when I think about my own family and the children in it growing up in a world where they are yet to discover who they are and whether or not they will be accepted. I have to say, there have been meetings that I haven’t gone to because the awful, terrible reduction of the stories of people I love to some kind of debate is something I find very hard to deal with, no matter how polite people are being about it.

So I watched this documentary and heard these articulate young people who weren’t prepared to be dumbfounded and depressed and who figured out a way to speak into the lives of people who were taken away and cut off from the world against their will, and I felt that this was the world I want to belong to; where love speaks in love so that it is impossible, even for the then director of the Love In Action program, not to feel inspired to figure out what caring for someone really means.

You need to see this film if you are not sure whether ‘reparative’ therapy is really harmful or not, but it’s also an excellent example of how to care for people as a collective.

Many thanks to Peterson Toscano, one of the associate producers of the film and a constant source of inspiration and joy in my life. 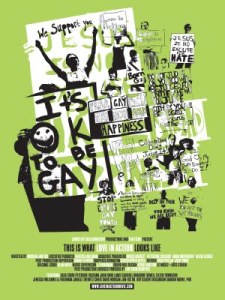